I should have been wearing skates!


I uploaded this video in HD (720p). Click on the Youtube button for the option to watch it in High Definition.
Lake Simcoe looked completely different today then it did last week. This past week we saw spring like temperatures in Barrie resulting in a thaw on Lake Simcoe. The past 2 days has seen a return to cold temperatures resulting in a lot icy areas on the lake. Today I skied the entire length of Kempenfelt Bay. Kempenfelt Bay is huge and feels like a separate lake all by itself. The bay was very icy. The first few kilometres I skied was sheer ice and I had to push pole through it. The rest of the bay was covered in icy patches. I ran into a number of pressure cracks, the largest of which was at the mouth of the bay. Towards the end of my trip my camera froze!
Distance: 17 km Total Time: 2.5 Hours 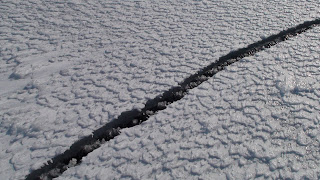 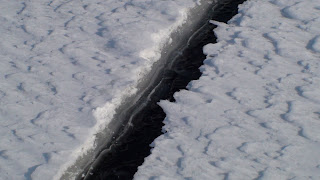 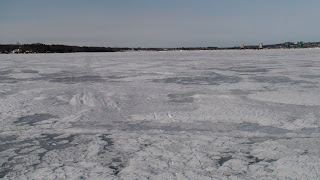 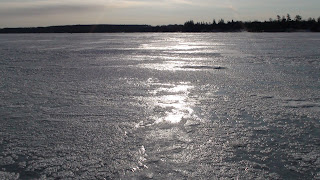 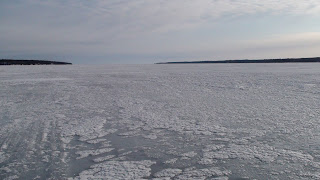 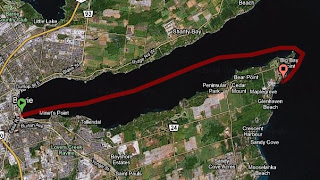 Posted by Patrick Johnson at 3:44 PM No comments:


What a crazy ski on Lake Simcoe today! I skied on Kempenfelt Bay from Centennial Beach to Minet's Point. The temperature was only -4 degrees Celsius but 30 km/hr winds from the west made for very blustery and chilling conditions. Drifting snow made it hard to find a decent trail and it was a constant battle with the wind. Out there I did see a kite surfer as well as a guy on a modified dirt bike practicing on an ice track.
Distance: 4 km Total Time: 40 minutes 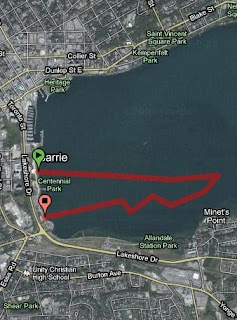 Posted by Patrick Johnson at 10:04 AM No comments:


Got up early to start my day with a ski. I decided to ski a bit earlier to take advantage of colder temperatures (didn't want to ski through slush today). The temperature was -6 degrees Celsius with great visibility. There was a small breeze coming from the south which help dissipate the oil and gas fumes from the snowmobiles that I encountered last week-end. I left from Lockhart Road which exits into Sandy Cove. It was much quieter entrance onto the Lake then departing from the 9th Line. The first thing I saw was the sunrise over Fox Island. Simply breathtaking.
Distance: 7km Total Time: 90 mins 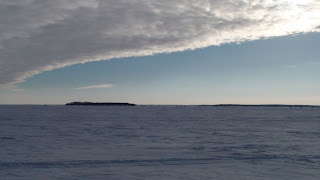 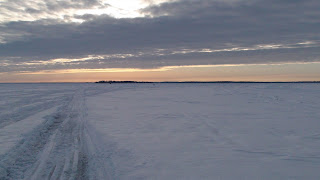 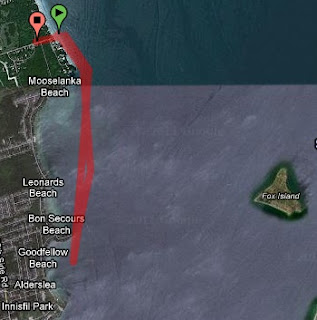 Posted by Patrick Johnson at 3:44 AM No comments:

What a Beautiful Day!


What a beautiful day on Lake Simcoe! The Lake was very different from last week-end where I was fighting cold temperatures, a significant wind chill and deep snow. Today was sunny, only -7 degrees Celsius, and there was no wind to speak of. This probably explains why there was a surplus of people out and about on the ice today. Most of them were either ice fishing in huts or on lawn chairs. I skied off the 9th Line and went towards Fox Island before turning south towards Cook's Bay. The snow was quite pleasant to ski on. This past week the temperatures have hovered just below freezing causing some softer conditions. The colder weather last night firmed the snow up and made for faster skiing. Lots to see today. Snowmobiles, ice huts, a race tracks for RC Cars and even a plane scoping out a place to land!
Distance= 5km Total Time= 50 mins 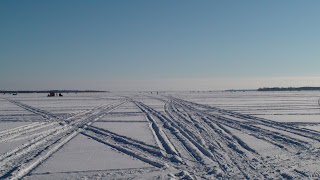 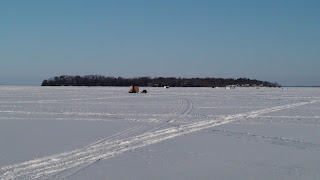 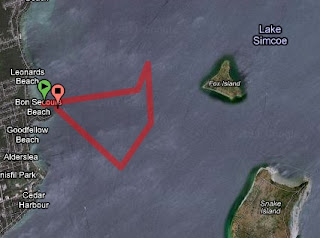 Today I skied home from work. The school that I work at is only a couple of blocks away from Lake Simcoe. My goal was to walk to the Lake with my skis and ski the 7 km North from the 9th Line to Big Bay Point. Lots of obstables in my way of skiing today. The temperature this morning was a bone chilling -27 degrees Celsius! Fortunately by late afternoon it rose to a balmy -12 degrees Celsius. The wind was 25 km from the South East (at least I wasn't skiing into it). I was very concerned that I wouldn't make it to my destination before the sunset at 5:20 pm. When I got out to the Lake it begin to snow and reduced the visibility substantially. What was a clear day quickly turned into a stormy winter scene on the Lake. Other challenges included deep snow, ice fissures and oh ya, did I mention I almost went through the ice!? Check out the vlog from my trip below.
Distance= 7 km Total Time: 80 mins 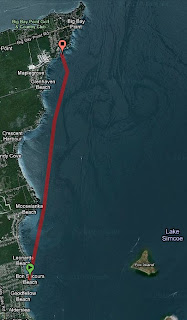 Posted by Patrick Johnson at 3:55 PM No comments:

What a difference a year makes! Last year at this time on Lake Simcoe there was a thick layer of snow and skate skiing was fast. Last week's heavy snowfall has left the lake a winter wonderland of deep powder. The first half of my ski I was either in deep snow or traversing narrow snowmobile tracts. I needed lots of poll pushes to help guide my skis through the snow and narrow trails. It became a real upper body workout. Finally I skied further away from shore and found multiple snowmobile trails which I labeled as the snowmobile highway although it was still tricky to navigate. I was able to pick up my speed by straddling the two trails in a bit of a balancing act. Total ski time was around 70 minutes. It was a hard ski that pushed my cardio conditioning. 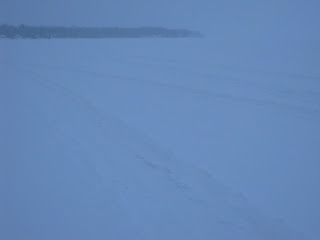 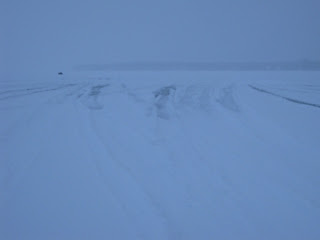 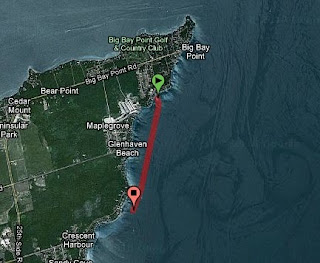 Posted by Patrick Johnson at 5:08 PM No comments:

First Lake Ski of the Season! 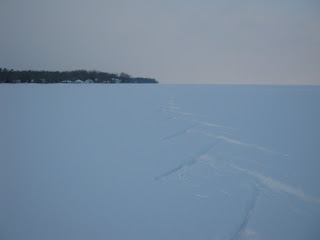 Yesterday I ventured out for my first lake ski of the season. The temperature was around -5 degrees Celsius with a wind chill factor of -10 degrees Celsius. We had fresh snow the night before which left 15 to 20 cm of powder on the ice. I spent a good deal of time yesterday morning reading ice fishing message boards to understand what the ice conditions were. Kempenfelt Bay (by far the deepest part of the lake) was reporting 4- 6 inches of ice however half of that was black ice (considered weak). Along the shore of the main portion of the lake (where it is shallow) was reporting 7-9 inches of good ice (white or blue). Mid-lake only had about 3 inches of ice. After I figured out that it was relatively safe (I am never fully trusting of ice) I got my gear and headed out from Big Bay Point.

Immediately it felt like there was much more snow at this time then last year. Last year saw very little snow on the main part of the lake. Towards the end of the season, Kempenfelt Bay was getting fairly tough to ski on given the amount of snow accumulation. Strong winds and low snow accumulations kept the main lake fairly clear.

Although the snow was fairly deep, it was generally pleasant to ski on once I got away from shore. I headed down towards Sandy Cove (round trip it was about 45 minutes). The wind was fairly strong but more then tolerable. My biggest obstacle was that I left late in the day and would have to be careful not to get caught in the dark (one of my greatest fears of lake skiing is being hit by a snowmobile. Snowmobiles travel at insane speeds on Lake Simcoe and I am always aware of their proximity to me. I now have a strobe safety light that I wear).

I managed to make it back before dark. About 15 minutes after I got back it started to snow again producing near zero visibility. All in all, a good start to the season. I was thinking about skiing today but right now the temperature has not gotten above -16 degrees Celsius (not counting the wind chill)! 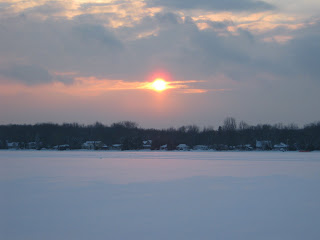 Posted by Patrick Johnson at 10:55 AM No comments:

Patrick Johnson
I am a teacher and fitness enthusiast who enjoys being active outdoors. Last year I took up cross country Skiing with my wife Julie. I spent a great deal of time skiing on Lake Simcoe. Although I like skiing on groomed trails I love the conveniences, challenges and beauty of Lake Simcoe skiing. My skies usually last from 1 to 3 hours and I covered anywhere from 5 to 30 kms per ski depending on the conditions. In the warmer months I enjoy training and racing in triathlons. Right now the Lake Simcoe Ski Club consists only of me! If you are interested in this sort of back country skiing, please send me an e-mail: pat.johnson@me.com or on Twitter: @patmjohnson